What’s a good name for a friendly giant? How about a scary creature that tries to hurt people. What would it look like? In other words what scares the crap out of you?

Writing to a Deadline is Hard

I am sweating away, trying to get 3 chapters of a fantasy ready to send to a publisher as per his request and I am finding characters are so much trouble to create and name. Lucky I found decent names for my children; it could have been bad…

106 Ways to Deal with Grief: Background – What is the story behind the points I put in the book. www.KathyBriantBooks.com

2. Don’t put the pictures away. Bring them out.

Sometimes it’s too painful to look at the pictures and things from the person who died. People clear the decks, removing any reminder they might have of the person who died. They clean out closets and put pictures away in drawers so they don’t have to look at them. Ok, for a first response that’s fine if you need to do that. But after a while, I think you will want those pictures back and they will help in the healing process.

I think it is important to have a reminder of the person close by. Some people even create a little altar with the person’s picture and some of the things they liked or things that remind us of them. I think pictures are important.

The first thing I did within a week or two of her passing was find a good picture of Shannon and put it in a frame someone gave her for Christmas, an especially nice one. It was of her just before she got sick with the depression that she never came out of, so in her mid 20’s. It’s even a picture she took of herself to use in a web site she was creating at work, so it is how she would have wanted to be remembered. It’s the same picture I used at her funeral since she was cremated, the one people said, did you see that picture come alive? I did. So it was special. I also used that picture in her art shows I finally managed to have, along with some of her art so people could see the person that created all that fine art

For the first year or so, each month I would put it on a table with a candle burning to commemorate the day of the month she died and that made me feel better. I was never a ritual person, but that candle before her picture meant a lot to me.

Now the picture is within viewing in the living room and I often talk to her. I’ll tell her how much I still miss her (after five years) and tell her little things about the day she would have found interesting. So keep a picture near for comfort. It’s a good thing. 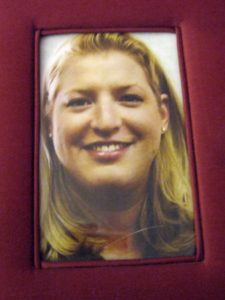 106 Ways to Deal with Grief

Kathy will be selling her book along with many other authors also selling books at: 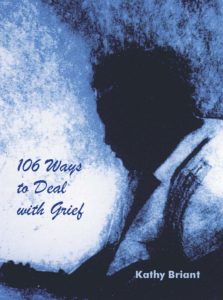 106 Ways to Deal with Grief

Kathy Briant who lost a daughter in 2009 talks about her book and her experience with death from suicide and grieving.